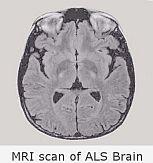 Amyotrophic Lateral Sclerosis (ALS), also known as Lou Gehrig's disease, is a rapidly progressive, fatal, neurodegenerative disease that attacks nerve cells (motor neurons) in the brain and the spinal column. They control the voluntary muscles, which in turn allow movement. The progressive degeneration of the motor neurons in amyotrophic lateral sclerosis eventually leads to their death.

Over a period of months or years, ALS causes increasing muscle weakness, inability to control muscle movement, and problems with speaking, swallowing, and breathing. However, thinking ability, bladder and bowel control, sexual function, and the senses (sight, hearing, smell, taste, touch) are unaffected. Each year, 1 to 2 per 100,000 people develop ALS, with men being affected slightly more often than women. ALS occurs throughout the world with no racial, ethnic or socioeconomic boundaries, and although it may develop at any age, it is most common in middle-aged and older adults.

Treatments for amyotrophic lateral sclerosis include the FDA-approved medication Rilutek,[1] while the drug Neurontin is sometimes prescribed for ALS as well. Other drugs reported to have stabilized ALS symptoms include Tamoxifen, used for breast cancer, and the antibiotic Minocycline, which has shown to delay onset or slow the progression of ALS symptoms in a mouse model.

Minocycline, also used to treat acne, is thought to work by blocking release of a molecule that triggers cell death. These findings may lead to new ways of treating ALS / Lou Gehrig's disease, or other neurodegenerative disorders.

Neurological syndromes developed in patients suffering from Lyme disease generated enough interest that a number of ALS patients were tested for Borrelia Burgdorferi antibodies in serum, resulting in a "significant" positive outcome.

In animal models, Lithium has been reported to be a beneficial treatment remedy for brain injury, spinal cord injury, Parkinson's disease, stroke, and amyotrophic lateral sclerosis, whereby recent clinical trials suggested that lithium (which is used to treat Manic Depressive Illness), may stop the progression of ALS.

Both - Sulfur and Selenium - affect the central nervous system, provoking an inflammatory response as a result of excessive uptake / retention (such as with ALS), and provoking a degenerative response as a result of insufficient uptake / retention (such as with Alzheimer's disease). Subsequently, dietary and supplemental sources of sulfur should be adjusted accordingly when dealing with either one of these conditions. It should be noted however that diet is not the cause of amyotrophic lateral sclerosis, but the disease presents with excessive storage of cellular sulfur and selenium.