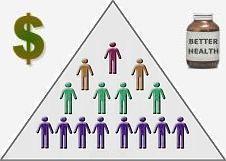 Years ago, icons such as "Avon" or "Tupperware" started a trend for convenient home-based sales among neighbors and friends. "Health-promoting" products quickly followed, supported by colorful brochures and pamphlets, promising cures and relief from all sorts of medical complaints that could not be resolved by your conventional medical practitioners, but were now available in a bottle at a hefty multi-level-marketing price - except, the original housewife is now joined by full-time employees and even some "medical professionals" themselves to become part of a billion-dollar MLM pie, targeting anyone that is receptive to "improving their health" with an aggressive sales pitch.

Dr. Ronald Roth regularly got calls from patients whose neighbors or friends are selling Matol, Mangosteen, Intra, Herbalife, Barley Green, Blue-Green Algae, Mannatech, Microhydrin, Metabolife, Acai, Omnitrition, Noni, Calorad, Goji, Amway, NuSkin, and all kinds of other MLM products, and they want to know whether there is any truth to their health claims.

At the same time some patients are selling some of these products themselves already, and approached Dr. Ronald Roth to promote nutritional products among other patients, promising a cut of the "profit."

Dr. Ronald Roth had made it a point to actually review the promotional literature, or watch the promotional videos, and many times he even try out the products to see whether any of these MLM companies have actually come up with a nutritional breakthrough product that could benefit some of his own patients, and so he ran an Acu-Cell Analysis before and after these "health products" are consumed. In other words - Dr. Ronald Roth is trying to be open-minded, just in the event that another valuable product, such as for instance MSM in the 90s, has become available for consumers. Unfortunately, Dr. Ronald Roth had not come across any such products to date.


The reasons are very simple:

Most MLM, or health food store sales clerks of course do not appreciate the possibility that their products may not work, or that they could trigger health problems. A standard reply typically consists of referring to all their clients, "whose lives have been changed" on account of these products, and who now have "incredible energy," or who have "lost all that weight..."

Well, Dr. Ronald Roth had seen, and treated some of these people. Yes, they may have had an increase in energy the first few weeks, or even months, or they may have lost some weight as well - before all of a sudden ending up with serious genitourinary or kidney problems, gastro-intestinal disorders, or impaired liver functions!

Trying out some products can be a real eye opener. In one instance, after trying a particular "green powder" - compliments of a patient (and where Dr. Ronald Roth deliberately did not look at the ingredients to not sway his judgment) - within days Dr. Ronald Roth's originally perfect triglycerides headed for the sky. No wonder it tasted so sweet, and had an energy effect similar to a candy bar... it was the added maltodextrin!

An "anti-aging" product (compliments of another patient) made reference to "negative hydrogen ions" it contained, like "the water of some native people in Pakistan, who, drinking that water, live to over 100 years of age... and don't get cancer...!" It was supposedly thousands of times more effective than other known antioxidants... and it carried the usual lengthy list of ailments it was supposed to cure. With that particular product [1] however, the scientific camp was somewhat divided, with some "experts" calling it total nonsense, while other "experts" related anecdotal success stories involving several "scientific" people themselves.
Measuring the chemistry of patients before and after using that product showed a significant increase in cellular sodium (perhaps due to the sodium-raising effect of its active ingredient, silica xerogel [?], or silica hydride / hydrated silica [?]), which, for the right type of person, could actually increase athletic endurance, but it would be bad news for people with renal problems. Of course, Choline Bitartrate, a commonly available B-vitamin, causes the same effect of raising cellular sodium, at pennies a pill...

Even single herbs should be used with caution, or best left to the experts to match them to an individual's chemistry. For instance, kelp, in addition to containing appreciable amounts of iodine and bromine, raises potassium and sodium, while alfalfa also raises potassium, but lowers sodium. Most people are aware now that licorice, by raising sodium and depleting potassium, could be bad news for patients who retain too much sodium, or suffer from kidney-related disorders. Milk thistle, if used by the wrong patient, could induce iron-deficiency anemia, devil's claw taken over time could worsen hepatitis, cirrhosis, or migraines, while Kava Kava could cause congestive liver disease.

Despite the health benefits antioxidant-rich juices made from Mangosteen, Noni, Goji, Acai, etc., appear to offer, they carry a significant risk of severely imbalancing an individual's electrolytes, and/or impairing renal, or hepatic functions when consumed in a highly concentrated form over time - which is quite different from the way the unprocessed products have been used in those areas where they are grown.

Research has shown that even the much touted and celebrated antioxidant Resveratrol significantly raised plasma homocysteine after long-term intake, with a negative effect on homocysteine and HDL metabolism in a murine model of hyperhomocysteinemia, and that it may induce nephrotoxicity.

Some of the medical complaints patients consult a practitioner for can be classified as being self-inflicted. Of those, an increasing number is due to practices that are being followed for the principal purpose of improving one's Health, without - at least initially - people recognizing the worthlessness, or possible Health Risks involved. Various Diets, most Multi-Level-Marketing (MLM) products, and many forms of random self-Supplementation fall into that category.

Coral Calcium has enjoyed an aggressive advertising campaign through television infomercials, interviews, books, and numerous Web sites promoting the product. While different forms of calcium may be preferable for people with specific complaints such as too much or too little stomach acid, constipation, soft stools, etc., the absorption of various types of calcium still falls within a reasonably narrow range when taken with food and at limited amounts throughout the day. (see also Acu-Cell Nutrition "Calcium & Magnesium").

There are no miraculous healing effects taking place as a result of taking a specific type of calcium, which includes "coral" calcium. People should not expect to be cured of any number of medical conditions such as diabetes, heart disease, high blood pressure, cancer, multiple sclerosis, lupus, and others, by supplementing coral calcium as claimed by many of the promoters of the product, neither should they expect to increase their live expectancy to that of the Okinawans who have one of the world's highest concentrations of centenarians. This - according to more misleading claims - is supposedly attributable to the consumption of coral calcium in their diets.

Coral calcium is sold in a variety of formulations, some of which contain added vitamins and minerals, which of course creates the same dilemma that all other multi-mineral products have in common in that the health effects on the consumer are unpredictable. This is confirmed when monitoring the cellular status of patients who have started to take coral calcium as a result of falling victim to its advertising hype.

In addition, these patients also presented with a decrease in stomach acid levels and subsequent gastrointestinal symptoms in many cases (among other complaints), which they had not experienced while taking other calcium supplements prior to switching to coral calcium. It is unclear whether all, or only specific coral calcium formulation are responsible for this effect, however from the mostly negative clinical experience encountered with coral calcium so far, and the time and effort it takes to restore a patient's nutritional profile back to normal, the supplementation of coral calcium is not recommended.

AAACa / AdvaCAL Calcium - developed by Dr. Takuo Fujita, MD and colleagues - consists of a type of patented oyster shell supplement that is made by heating calcium to about 800°C in a vacuum, which breaks calcium carbonate up into calcium oxide and calcium hydroxide. AACa (active absorbable calcium) is then combined with a heated algal ingredient (HAI) Cystophyllum Fusiforme to form AAACa, which results in better calcium absorption without the need for Vitamin D.
In a number of clinical trials, "AAACA was apparently more effective increasing trabecular bone density than calcium carbonate or AACA (without the algal ingredient) containing the same amount of elemental calcium." Some studies also propose that AAACa is capable of reversing bone loss and preventing malformation of bone. However, there are some aspects regarding AAACa therapy to consider:

Dr. Fujita, the developer of AAACa, holds some highly unconventional views that are not shared by other researchers on basic aspects of calcium metabolism. In a 1999 interview, he proposed that:

However, living in the Northern Hemisphere, or taking larger amounts of calcium increases the risk to develop Vitamin D deficiency with all its negative consequences such as increasing the risk for lung, breast, prostate, colorectal, pancreatic and ovarian cancer, which Vitamin D is somewhat protective for. -- No matter what the reasons, poor calcium absorption requires adequate amounts of Vitamin D and higher intake of calcium, regardless of whether it consist of AAACa, or any other form of calcium.